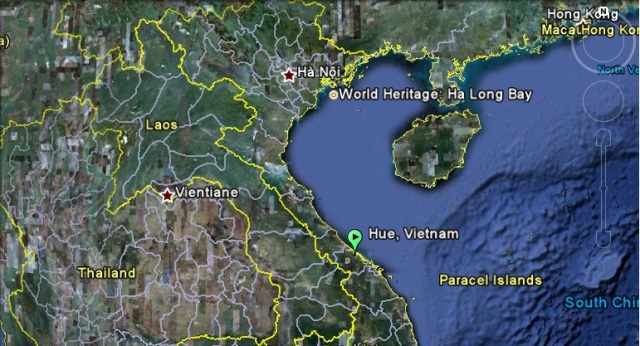 Places of we visited on this blog post: Hue, Hanoi, Ha Long Bay

Adam and I have been enjoying ourselves in Vietnam:  the weather was great, food was cheap and delicious, and the people were friendly (when they weren’t tugging at your shirt to buy something). Next stop after Nha Trang was Hue (sounds like who-whey), a decent sized city and home to the cheapest hotel room on the entire trip so far ($8 total). We decided to get crazy here and rent a scooter for the day. Adam said he wanted to try it out and boy was it an adventure. With the thousands of Vietnamese families zipping in and out of traffic I was nervous and excited… I guess that’s what travelers insurance is for, right? Once we were pointed in the right direction we headed East towards the Hue Citadel. Compared to some of the ancient temples we’ve seen in southeast Asia and China, this wasn’t very impressive. We learned that this is where a lot of American bombing took place in response to the communist takeover of Hue, this flattened most of the Imperial city and unfortunately, only a handful of the ancient buildings remain. 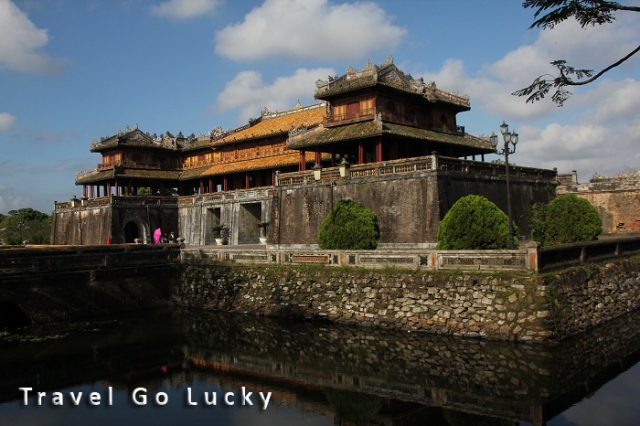 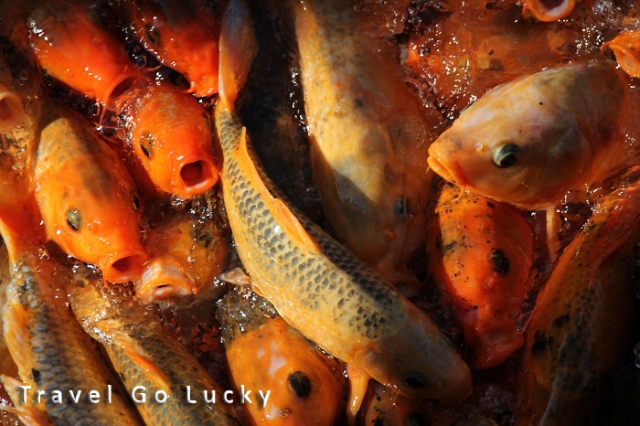 The Koi Pond at the Citadel

After Hue, we headed North to Hanoi on an overnight train. Once again I was pleasantly surprised with all the cute shops and trinkets they sold. I should also mention how Vietnam narrowly edges out Malaysia as the reigning king of knock-off merchandise. All the finest (fake) North Face, Adidas, and Nike gear was available both in Hanoi and Saigon, for a fraction of the price that the stuff is back home. The quality wasn’t up to same standards as the real thing, but just looking at it could fool anyone. Adam and I spent most of our time roaming the streets and enjoying the hectic atmosphere. Adam was even offered some weird concoction of alcohol by a group of men sitting around, which he couldn’t help but to say no to, because that would be rude. They offered some to me which I had to politely say no to about 6 times. The picture of Adam’s face as he took his “shot” was priceless and exactly the reason why I refused. The funny picture of me with the conical Vietnamese hat was right before we got swindled into buying a lot of pineapple from these ladies. They came up to me and put the hat on me, I of course was excited- good photo opportunity and Adam shot a couple of pictures, then we switched I took some shots of him. They put four bags of pineapple in our hands and were asking for a ridiculous amount of money.  If this was the worst that we had to deal with while in Vietnam, that’s fine. Some people have all sorts of unpleasant stories of getting ripped off here. 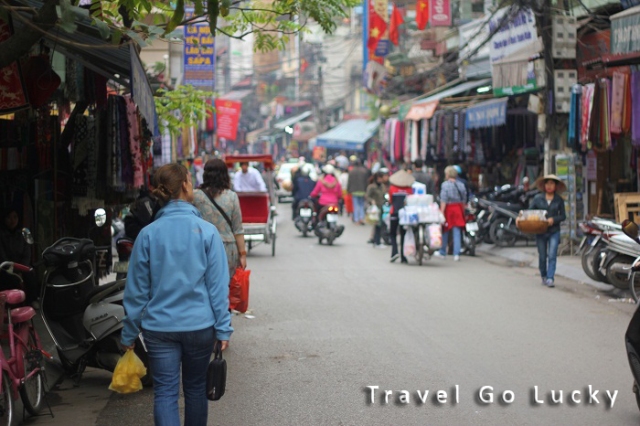 Dana walking through the streets of Hanoi 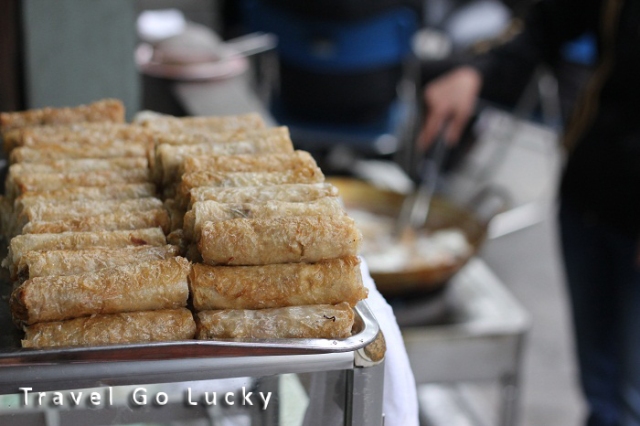 Spring rolls made fresh, right on the street 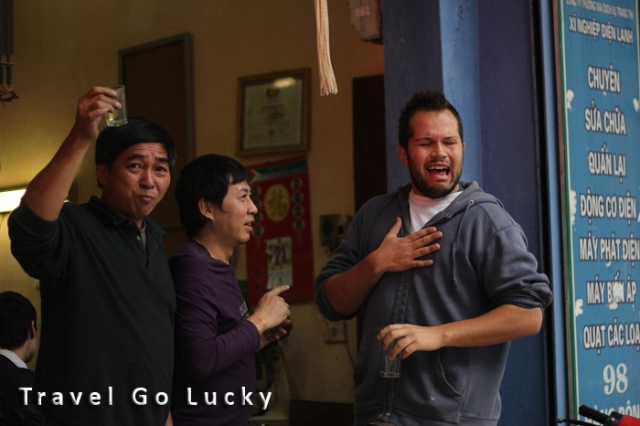 I hope they didn't take the reaction as being impolite. That was a glass full of pure alcohol. Yuck! 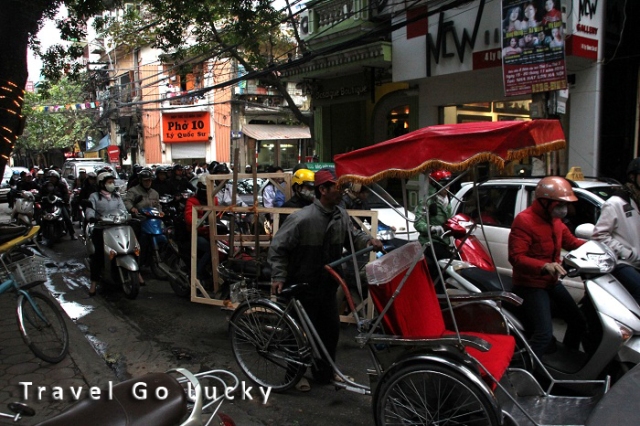 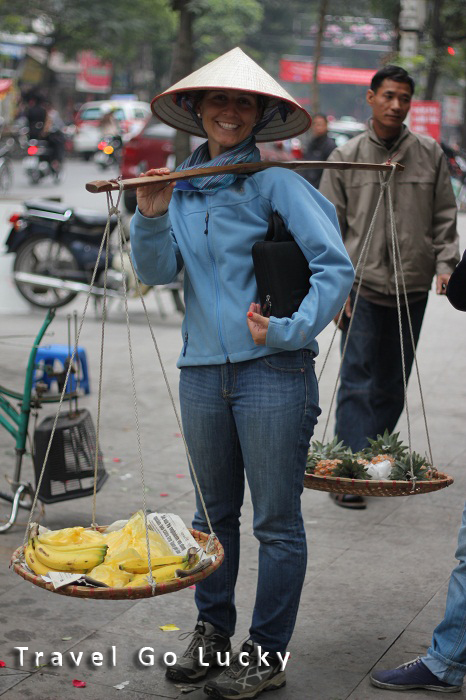 Blending in with the locals.... right before getting ripped off! 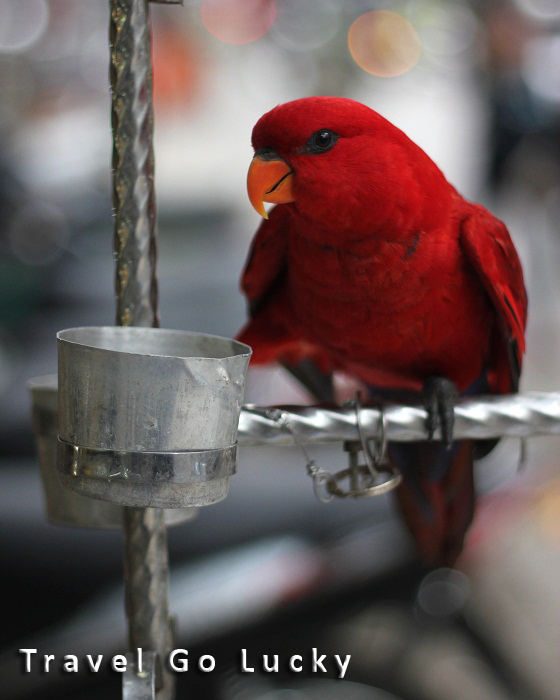 A random, pretty bird outside a shop in Hanoi 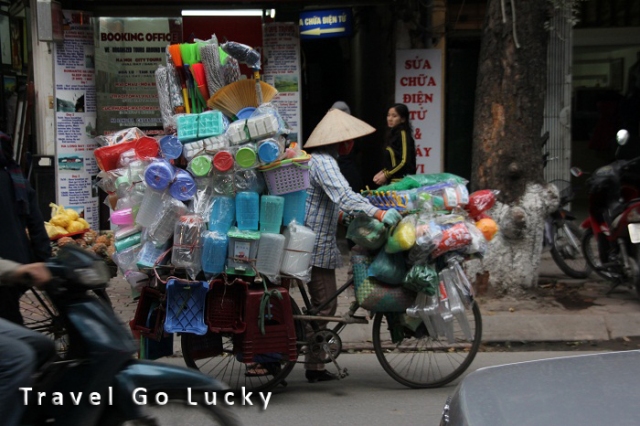 Now that's efficient use of a bicycle

After visiting Hanoi we headed East towards Ha Long Bay. Literally meaning “Descending Dragon Bay”, Ha Long Bay is made up of karst limestone islands, over a thousand in total. This type of geology was another type of a karst formation that we saw in Madagascar. The cruise itself wasn’t anything like our Yangtze River cruise we took back in China, it was much nicer with less people. Adam and I had our own private room and balcony too. We got to explore a gigantic cave that was once inhabited by fishermen during the Vietnam War. We were also told (not sure if it is true or not) but that these limestone karsts were an inspiration to the movie Avatar, where there were floating islands in the clouds, which we found to be pretty cool. We made a stop at one of the islands and were able to climb up the side of a small mountain and just hang out for a couple hours which was nice to get off the boat for a little bit. 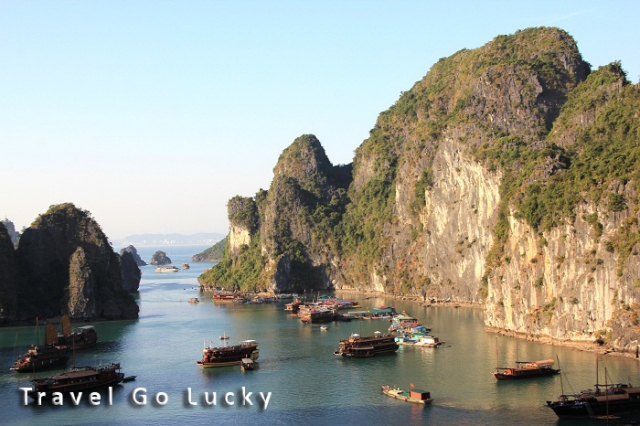 One of many picturesque scenes from Ha Long Bay 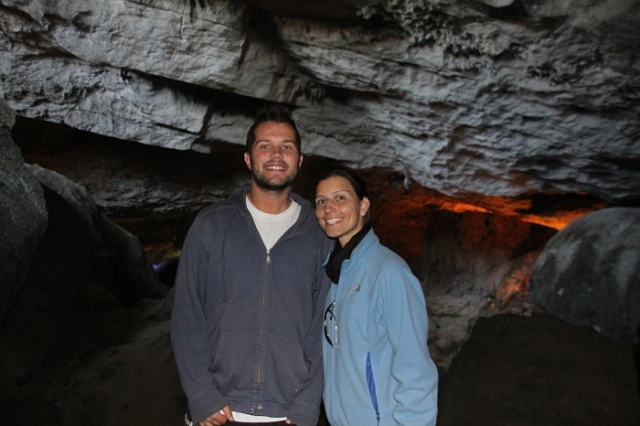 Inside the very large cave 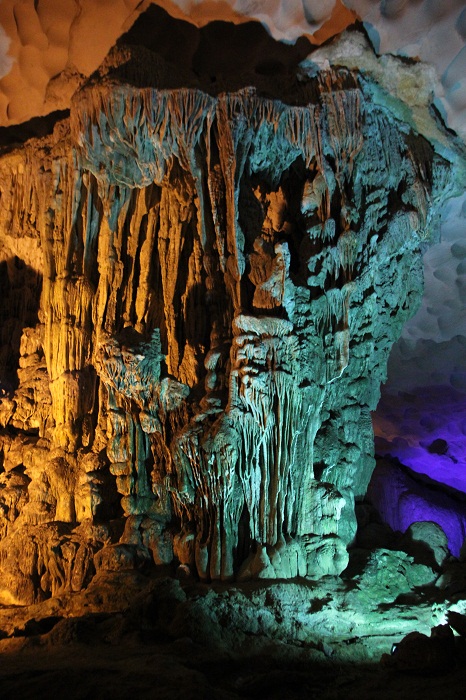 More from inside the cave 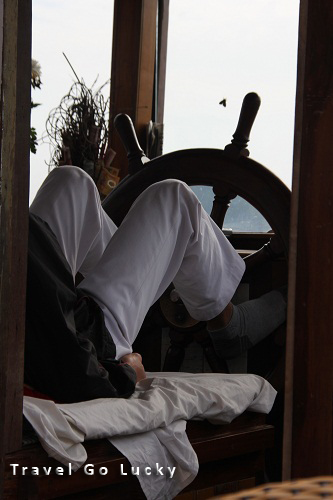 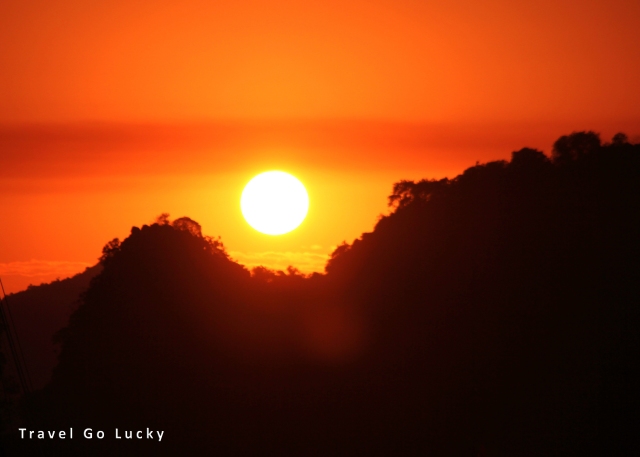 Out of our boating group, Adam and I were the only two who opted to spend the evening on one of the islands in a little village on Cat Ba island. The village was made up of a few dozen people, only one small unpaved road in the village, a handful of homes all nestled between two mountains. Farm fields stretched the small plains where dots of people were working hard. This place was so remote we had to get on bicycles and ride for a good hour or so inland up and down hill. The locals didn’t seem interested in mingling with us, but they weren’t chasing us out either so that was good. Surprisingly it was the comfiest bed we had slept in in months, we were sad to be leaving. The next morning, we took off for the boat, got picked up, and headed back towards land. We arrived in Hanoi later that evening, and got ready for the next interesting twist in our trip around the world. 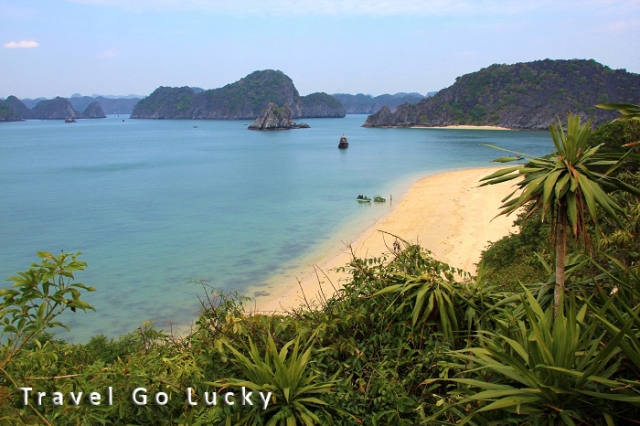 A view from our remote island 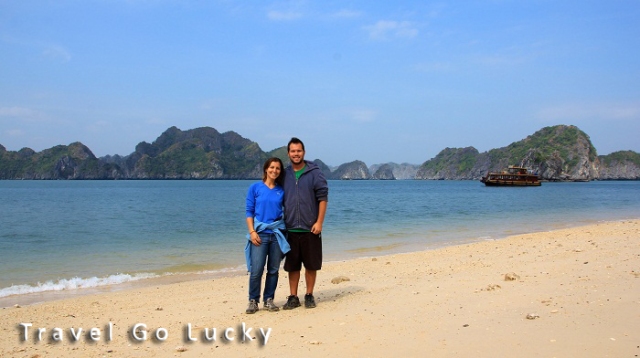 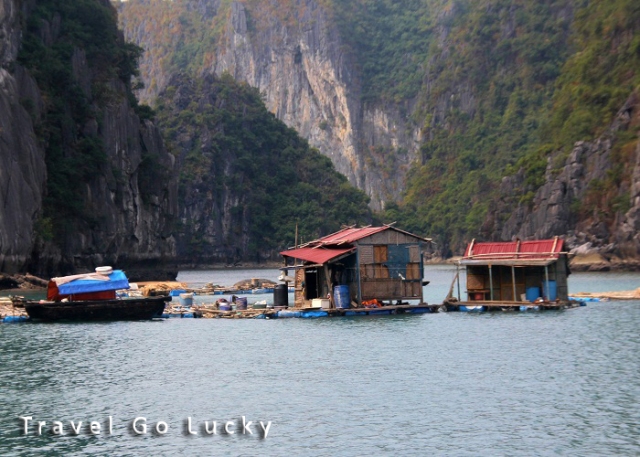 Floating village near where we stayed for the night... interesting way to create your own real estate

This entry was posted in Vietnam. Bookmark the permalink.