The King of the Jungle and Elephant Alarm Clocks

As we headed north through Zambia we arrived in Chipata, a village that is on the outer boundary of the Luangwa National Park.  Our campsite was separated by only a river…. that was frequently inhabited by hippos and elephants!  Upon our arrival at Croc Camp we were warned about elephants, hippos, and crocodiles that will be roaming around us at all times.  At first we didn’t really take the owner seriously until a troop of vervet monkeys rummaged through our groceries that we had ready for dinner. It was hilarious because we saw these cute little monkeys picking though our groceries and when our driver Nick started running towards them they scattered and made off with a couple bread rolls. This was a good start to the adventures at Croc Camp.

Adam playing with the monkeys at camp. (PS - he also decided to get a mohawk... lovely.)

Despite the wild surroundings, the camp site was one of the nicest we have stayed at so far. they had a swimming pool, bar, and dart board which kept us pleasantly entertained for the next two evenings. During the day we all hung out played some soccer, rugby and laid out by the pool.  Adam is doing his best to adjust to rugby but is frustrated that none of the other guys know anything about the NFL. Oh well.  It was great to just relax by a pool and not have to worry about having things organized while constantly on the move. 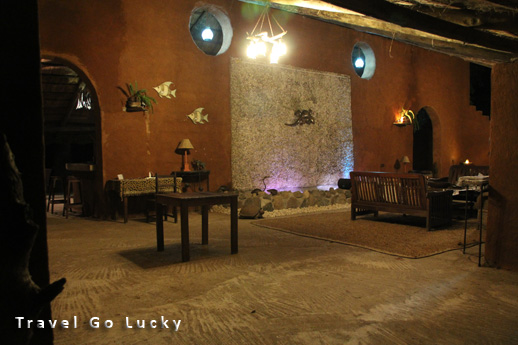 Nicest camp site we have stayed at so far

The second evening near our camp site we went on our first game drive, and it was going to be from dusk until later at night. We were so excited for the evening drive because of the possibility of seeing a lion was pretty good, according to our guide. The drive lasted about four hours and in that time we saw about 30 hippos on the river bank which was a little terrifying, watching their giant mouths yawn and see their gigantic front teeth. We also saw a couple of huge crocodiles, impalas, zebras while the sun was going down, but no lions… yet.

The deadliest large animal in Africa!

Adam posing with hippos in the background 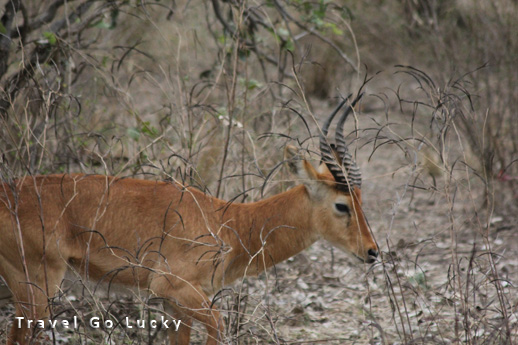 A lone hippo far off in the distance at sunset

The sun was setting and my eyesight was playing with me. I kept thinking I saw something when I really wasn’t seeing anything. Finally all light was gone, it was completely dark out on a cloudy evening, with no moon light to help us out. The drivers assistant was shining a huge spot light out into the dark hoping to catch the eyes of any predators.  Finally, near the end of this drive we came upon a male lion! 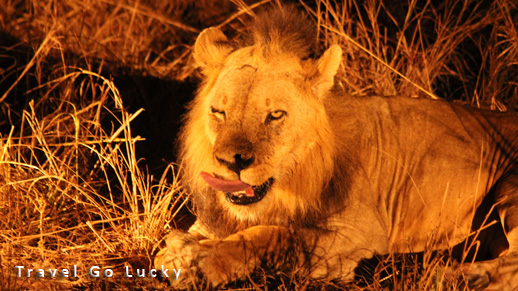 It was absolutely breathtaking to be so close to one of the most vicious creatures in Africa, and there he was just sitting there staring back, and licking his paws. I’m sure we will have more opportunities like this, but we will never forget our first lion in the wild. Adam got some pretty amazing photos of this with only using the spotlight. I still cannot believe he was only about 15 feet away from us.

To wrap up the evening we were able to see a baby elephant and it’s mother munching on trees right next to the road.

Elephant having a late-night snack

This is just getting us warmed up for the Serengeti in about two weeks. I believe all we are doing there are game drives as well. When we returned to camp, the group hung out and played a couple games of darts and retired for the evening. The next morning was amazing because we had a family of elephants storm through our camp. Six ginormous elephants knocked over garbage cans, chairs, anything that got in their way. This happened at roughly 6:45 am, waking us up for the day. There were about 6 of them walking right in front of our tent.  Adam had unzipped our tent to try and find his camera and all I could do was tap him on the arm and say “zip it up, zip it up!” in my quiet voice, as I noticed one of them walking straight for us. My heart was racing, but it was so exciting. One of the medium sized guys stared us down and got so close he grazed our tent walking through! They continued on to the neighbors, and only a couple other of our campers had woken up in time to see what happened.  We got out of our tents in disbelief, and unfortunately, Adam didn’t get any pictures. His batteries were getting charged from the game drive the night before. It will be a memory that we won’t forget anytime soon!

This entry was posted in Zambia. Bookmark the permalink.