From the moment we got past customs, we knew Madagascar was going to be unlike any place we have previously visited. As soon as we made it though security in Antananarivo we had about 8 different people coming to us spitting out Malagasy faster than anything we’ve heard before and trying to grab our bags out of our hands. This may sound a bit overwhelming, and it was, but these men meant no harm, they just wanted us to get in their cabs. Thank goodness for Adam and his research, this was the only thing we were really prepared for, as we already arranged an airport transfer through our guest house. The guest house manager, Tanjona, showed up just a few minutes later and we were rescued.

The drive to the guest house was one we will never forget: the sights, sounds and smells seemed to be extremely intensified, almost like seeing HDTV for the first time, but this was all real, if that makes sense. Adam already feels dumb for thinking that Mauritius had crazy driving. Dry dirt roads with bump after bump, bikes, scooters, small taxi’s churning out thick diesel exhaust, even carts pulled by oxen were everywhere. Small rows of little huts where the people tried to make their living were a sight to see. Butcher shops with raw flesh hanging, rows and rows of vegetables, rice, live ducks sitting in a row waiting to be someone’s dinner. One thing that I will always keep with me are the children I’ve seen running though the streets: bare foot, waving, and smiling. Some carried smaller children on their backs, others helped out parents by carrying large bags of rice.

At the guest house, Tanjona asked us if we came to Madagascar the day we did on purpose. We both look at each other with puzzled looks on our faces and said, “nope.” He then proceeded to tell us that we arrived on Madagascar’s 50th Anniversary of Independence! He invited us to join him later to see fireworks, and we figured it would be a good idea, as some place like Antananarivo was definitely someplace Adam and I couldn’t just check out by ourselves after dark. After a couple of hours relaxing at the guest house, we hopped in a taxi and headed up to top of a huge mountain to get a better view. It’s winter here, and the sun goes down at 6, so we ended up waiting in the cold for about 2 hours for the fireworks to start. It’s funny, but it seemed a little like home on our 4th of July, kids running around with glow in the dark swords and little lanterns, family and friends talking and laughing amongst themselves, and food vendors were everywhere. I won’t remember the fireworks as much as I will remember the cheers and genuine excitement from all the little kids. 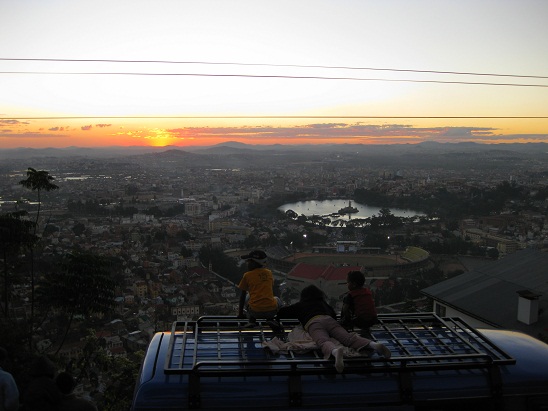 Our view of the sunset, fireworks in Antananarivo

We were tired, hungry, and I was woozy from the car exhaust on the long ride back to the guest house. Diesel fuel will definitely take some getting used to for me. We made it back pretty late and were greeted by a large “traditional” Malagasy dinner. Tuna, chicken, ox tail, cassava leaves, and rice. Everything was excellent.  Our long first day came to an end after dinner, and it was a day I will never forget.

(Editors Note: Sorry for the lack of posts lately, but internet in Madagascar is RARE. Since most of our time here is in smaller towns, we simply don’t have access until we get back to the bigger towns. Lots more to come next week!)

This entry was posted in Madagascar. Bookmark the permalink.